You look in the mirror and find at least one imperfection.

Some of these skin conditions are transient, and some permanent, whilst some come in the form of spots, pustules, moles, and even pigmentation.

Whilst it’s impossible for us to give a complete diagnosis of every condition found on your skin, this ‘go-to guide’, is comprehensive, and will help you address some of your more common skin concerns.

These are also known as liver spots and become more apparent with age, especially on those with sun-damaged skin.

What happens is that the melanocytes or pigment-producing cells over-produce melanin, which is a topic you can read all about here. 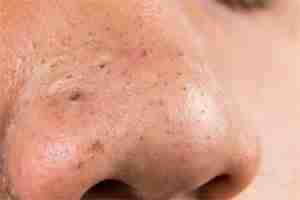 These are often referred to as “Open Comedones” and occur in oily areas of the skin.

They are caused by a build-up of dead cells in the follicle and oil secreted by the sebaceous glands, which solidifies in the follicle creating a hardened form of fatty build-up – the reason they become black is that once the comedone is exposed to air, the sebum (oil) oxidises.

How you remove your blackheads are really important, squeeze too hard, and you can cause scarring and pigmentation. For this reason, we have created an entire article dedicated to blackhead removal.

This is such a large and diverse topic that we also have created an entire article on the subject of dehydrated skin and how you can treat it.

These are unusual benign moles; they resemble melanoma and are often referred to as Melanocytic Naevus, those who tend to develop this type of mole, tend to have a family history of melanoma.

A study found that those with dysplastic nevi are more at risk of developing multiple melanomas, with ten times the probability of developing one in their lifetime, compared to those who don’t have moles.

Their poorly defined border recognises these particular moles, they are irregular in shape and uneven in colour.

If you are concerned about any changes in the appearance of your moles, you should seek medical advice immediately. As a general rule, a stable mole will never itch or bleed, and will never become ulcerated, or form a crust. Removing a mole does not, in any way, increase the risk of it spreading or changing. 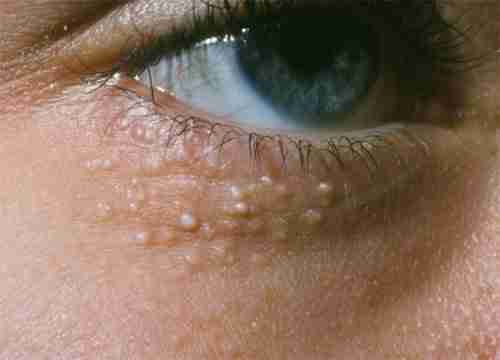 Hard, pearly, white lumps characterise milia; they are superficial cysts that form when skin cells (called keratin) become trapped instead of getting naturally sloughed off. The keratin gets lodged under a layer of protective skin tissue, a few cell layers thick.

Milia can be found on the cheeks and around the eyes, including the eyelids, and in some cases between the lashes, they range from 1-3mm in diameter. They are often associated with dry skin that tends to be acidic.

As discussed above, moles are often referred to as nevus or naevi, which means blemishes or lumps on the skin. They are collections of nevus cells derived from pigment-producing melanocytes.

Most moles are due to a localised overgrowth of melanocytes. On occasion, they can contain coarse hairs that are strong and dark; this is due to the plentiful supply of blood and melanin that is fed to them from the dermis, your deeper layer of skin.

They can be pigmented or non-pigmented, and are either present at birth or can be acquired during adulthood. Some moles appear to be hormone-dependent; they can also occur for the first time during puberty or pregnancy and often become apparent when taking birth control. Some occur as a result of overexposure to UV light.

A pore is a lay term that refers to the appearance of the openings in follicles on your skin’s surface. A follicle is a duct in the skin that contains a hair and is attached to the sebaceous glands that produce sebum.

Hair grows from the bottom of a follicle – this is also the way that sebum (oil) finds its way to your skin’s surface to lubricate your skin; the sebum flows through the follicle, which becomes stretched over time; this creates the opening known as a pore. When someone complains about having large pores, what they are complaining about, is the visible size of their follicle openings.

The term pore and follicle are often used interchangeably when discussing pores that are blocked – pores are in fact follicles, that are clogged with dead skin cells and solidified sebum.

A big question often asked by my clients, is can you actually reduce the size of open pores? Sadly, the answer is no despite what clever marketing claims try to tell you. Our article, how to shrink pores, answers this question in more detail.

Rosacea is a vascular disorder of the blood circulation. There are four types of rosacea; the most common occurs as diffused redness across the cheeks and the nose – in a butterfly shape that can create inflammation of the nose.

When the skin is flushed with blood, a biochemical reaction in the skin is released; this triggers the expansion and growth of new blood vessels, which increases the chances of flushing.

Our article, “What Causes Rosacea?“, is an interesting read, for those keen to find out more on rosacea.

These are harmless, flesh-coloured extensions of the skin and can be found on the eyelids, neck, shoulders, armpits, and groin.

They appear on the skin with a neck like a mushroom and vary in size from 3 – 15mm in diameter; larger tags can twist and bleed, and although harmless, this can cause an infection.

Interestingly, having multiple skin tags could be associated with intestinal polyps, so if you do have intestinal problems and suddenly develop skin tags, it is wise to see your doctor. Skin tags can be easily removed, by simple snipping and electrocautery. 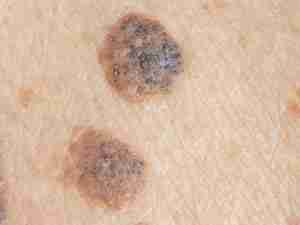 These are slightly elevated, rough, and scaly growths that appear stuck on the surface of the skin, often referred to as seborrhoeic warts, they can be found on the trunk, face, back of hands, and forearms.

They vary in size from a few millimetres to three centimetres; they range in colour from non-pigmented to golden, dark brown, and almost black. The surface is crusty to touch, and they can be irritating and itchy. Fortunately, they are benign and rarely become serious tumours. They are easily removed by curettage or cryotherapy.

A biopsy is usually required to rule out a more serious tumour.

This condition is due to an overgrowth of glands that have become blocked.

Sebaceous Hyperplasia occurs on the skin from adolescence onwards, and are most commonly found on the face, usually around the T Zone. They are yellowish or white in appearance and can be mistaken for milia, and have a central dip where the pore is.

These are benign tumours of the sweat glands that also look like milia; they are often mistaken for flat warts or pimples. Syringoma is flesh-coloured or slightly yellow and occur most frequently on the lower eyelids, and occasionally on the head, chest, and abdomen.

Interestingly, they are growths of the sweat glands and are completely benign.

This is one of the skin conditions we often see in our clinic, especially with those who have sensitive skin conditions. They are centrally dilated blood vessels and are often referred to as dilated capillaries or thread veins.

They are found mostly on the face or décolleté. Still, they can appear anywhere on the body, they can appear spontaneously, from trauma such as squeezing spots, or as a direct result of overexposure to UV.

These are papillomavirus infections of the skin’s surface, a common condition in children.

Most warts appear from trauma to the skin, especially on the hands and around the nails from biting.

Warts don’t usually appear straight away and incubation time can be anywhere between one to twelve months. They are spread by touch, and about one-third of warts spontaneously disappear within six months, although some can last forever if not treated.

These appear as plaques or fatty tissue and are most commonly found in the medial corners of the upper and lower eyelids, following the shape of the socket.

They may be an indication of high cholesterol or diabetes – if you’re concerned about xanthelasma, we recommend seeking medical advice.

If you have identified with any of the above skin conditions, chances are you will want to know how to treat them; whilst we can’t discuss all of them, below we have listed a selection of treatments that can be used to treat a few of these conditions:

This is used to treat telangiectasia and several other conditions. A needle is used to target the area, and with the help of galvanic current, this dissolves any coagulated matter. Most people find this treatment method less painful, and there is little or no crusting of the skin during the healing process.

When treating telangiectasia, a larger segment of the capillary is treated, so there are fewer traumas and better results.

This method is recommended for skin tags, plane viral, and seborrhoeic wart removal.

Diathermy is the most successful treatment available, as it targets the blood supply rather than just the surface area, a diathermy current enables the person doing the treatment to use the needle like a scalpel, severing the lesions from the skin.

The most resistant are viral warts, sometimes requiring several treatments.

Laser mole removal does vary, and the size of the lesion will dictate how many treatments you require.

Many of the above skin conditions will only require one treatment, such as seborrhoeic and plane warts and skin tags; treatment time can take anywhere between five minutes to one hour, depending on the size.

For telangiectasia or thread veins, each vessel may require two to three treatments over a period of four weekly intervals, and spider naevi may take more than one treatment.

It Is important that you are realistic about your treatment plan and what you expect from it; for example, with telangiectasia, it is unlikely all vessels will be removed. Instead, a 60-80% improvement is a realistic measure.

Be prepared to have to undergo top-up treatments, especially if your condition is hereditary.

Here at the Naked Chemist, we transform ordinary rituals into the extraordinary with beautiful, natural skincare, and expert beauty advice.