Mottled brown marks on the skin.

That once made your skin sun-kissed,

But now, with age, they are morphing into frustrating brown patches.

What are these marks, and how can they be treated?

Melasma is a form of hyperpigmentation and much remains to be understood about the origin and development of this disorder.

What is known is that pigment cells in the epidermis, known as melanocytes, are constantly stimulated to produce melanin.

It seems there is no shut-off valve that deactivates the cells found in the skin.

Getting to grips with Chloasma

If you’re pregnant, then you know to expect the unexpected – especially when it comes to changes in skin tone.

When melasma occurs during pregnancy it is referred to as chloasma and occurs occurs in 10-15% of pregnant women.

It is not referred to as “the mask of pregnancy” for nothing.

So why is it that pregnant women are so susceptible to dark patches on the skin?

Well, during pregnancy, all our hormones including estrogen, progesterone, and the melanocyte-stimulating hormone MSH increase, and it is this increase of progesterone that creates chloasma.

For those with chloasma, sometimes the discolouration will disappear following pregnancy, or if birth control pills and hormone therapy is discontinued.

A look at other triggers

Melasma is believed to be more estrogen-responsive, which is why far more women than men get it.

Underneath the brown color that is visible to the naked eye is inflammation and redness.

This inflammation stems from the liver, which is a result of hormones that are related to birth control pills or pregnancy after 30.

Lightening spots topically can be hit or miss, but inflammation can be calmed and topical application requires healing the source.

Other possible causes of melasma are:

Oral contraception: 10-25% of women on the pill can expect to suffer from this condition

Sun Damage and genetics: Over-exposure to UV deepens pigmentation, activating the melanocytes to produce more melanin – especially in those who are genetically pre-dispositioned to the condition. Research has found individuals typically develop this in the summer months, when the sun is the strongest.

Skin tone: Those more susceptible usually have darker skin tone; Asian women, for instance, with fitzpatrick skin type 3-4, have a 40% chance of getting melasma.

Hormonal Treatment: Whilst the relationship between hormones and this condition is not fully understood, research points to a link between melasma and hormone replacement therapy or intrauterine implants.

Medications: Certain medications such as anti-seizure medications are known to stimulate melanin, making the skin more prone to pigmentation after exposure to ultraviolet.

Fragrances: Some fragrances are a trigger, causing a photo-toxic reaction in the skin.

It characterised by uneven skin tone, facial discoloration, and irregular brown patches. It has a common pattern:

NOT ALL PIGMENTATION IS MELASMA 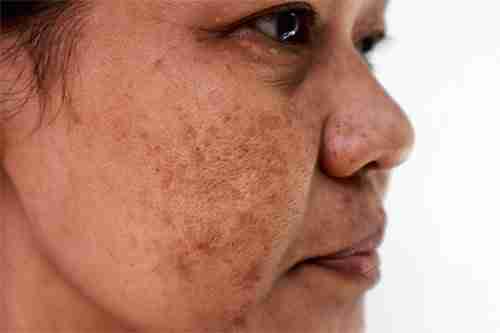 There are some common diseases that can be mistaken for this condition, so its important you don’t assume that your problem is only localised in the skin. Not all pigmentation is melasma.

If you are concerned you have either melasma or chloasma, a consultation with a skincare specialist is recommended.

By assessing your skin under a woods lamp, the skin care specialist will be able to identify the depth of pigment and find out whether it is epidermal, dermal, or both.

This will help you determine how successful you are likely to be in treating it, and it will also give you an idea of the type of treatments available for your particular concern.

Just so you have realistic expectations, it is important to note that chloasma is very difficult to treat.

Here at the Naked Chemist, we transform ordinary rituals into the extraordinary with beautiful, natural skincare, and expert beauty advice.

One thought on “Melasma and Chloasma: Unravelling the Truth”